Steamy romance, a bad-ass female protagonist, and vampires! What more can you ask for? Fans of the Goddess with a Blade series, wait no more! Blood and Blade is almost here, and if you’re getting really antsy, you can get a sneak peek right here!

There’s also a chance to win a print copy below!

Rowan Summerwaite is ready to finish what she started in Blood and Blade , the next installment in the Goddess with a Blade series by New York Times bestselling author Lauren Dane.

It’s been only days since Rowan and her friends eliminated the immediate threat to magic users and Vampires, but they’re already back on the hunt. Rowan’s out for vengeance, and she’s never been more driven—or angry. But she’s up against a being stronger than any she’s ever fought. To bring it down she’ll need more than the powers the goddess Brigid gave her…

This time she’ll need her friends, too.

She knows her husband will always have her back. As an ancient Vampire and Scion of North America, Clive has more clout and dominance than almost anyone. Rowan’s small but trusted inner circle insist they’ll join her in the thick of the battle, even as she argues it’s too dangerous for them. She’s also got a new dog. Familiar. Whatever. Star is a magical being put in Rowan’s path to help and protect her.

The hunt for ancient evil takes Rowan and her team to London and back to Las Vegas, bringing with them an unexpected alliance. Fortified by their rage, grief and determination, Rowan and her friends will stop at nothing when they track their enemy to the high desert in a final, deadly showdown.

Carl was quiet long enough that Rowan knew he wanted her to fill him in on what was happening.

“So we were just in Los Angeles. We killed a big bad. Magic-using Vamp named Lyr. Blood Front is back again. Or never left. Like cockroaches. Ugh. Anyway. We aren’t done. There’s more. Someone or something more powerful. Or… I don’t know. A different power making all this upset and murder type business between paranormal groups so it can be free to do whatever its own goal is and soak up all that discord in the offing.”

“Bill Shakespeare said something about there being more here on earth than we could have dreamed of. Or something like that,” Carl told her.

Which was his way of agreeing with her.

“Your man has bad magic on him,” he said after being silent for a long while.

Ice washed over Rowan’s skin. “What? How?”

“You know what. How isn’t important and I can’t tell you anyway. The priestess witch needs to intervene.”

Damn it. Rowan had been trying to talk Clive into letting Genevieve give him the magical once-over but he’d insisted he didn’t need any help. He’d used his gifts to jump into Lyr’s brain to take his memories.

But unlike his usual instant to a few hours before all the memories from the other person came to him, this time a week had passed and Clive was still having problems accessing memories and impressions.

It had turned him into a cranky, sulky dude and it was wearing on her.

“Because you love him. You don’t like it when he’s upset and you can’t fix it.”

She growled at his comments and the way he’d yet again plucked things from her head. And because he was right and she’d turned into a sap for love. Gross.

“I don’t mind poking at him to get him agitated. He’s way too uptight. He needs that. But I certainly don’t like it when something is hurting him. But I can’t kill it until I know just what it is.”

“Very true. Pull into that parking lot over there.” He pointed.

Rowan realized they’d only gone about five miles. Being with Carl often meant she lost track of time. Or he bent it. Or took them outside it. Or something.

When she did and parked in the spot he’d indicated, Carl removed his seat belt and turned to face her.

“Seriously. You can’t give me a dog. That’s not a present.”

Carl cackled and gave Star a scratch behind her ears that made her groan. She tipped her head to look at Rowan carefully before snorting and giving her shoulder a headbutt.

“Course not. She’s not a present. Star gave herself to you. I only introduced you.”

“Are you some sort of magic dog?” Rowan asked Star. Intelligent and curious amber eyes blinked back at her. She had a black coat with golden markings on her face and chest. Including the star shaped one that’d most likely given her the name.

“A cat would have been a very bad choice for you. And a lot of them were wary about you. Star here, well she knows her mind.”

Star licked her nose and it wasn’t disgusting.

“I’ll be seeing you soon enough. This one is going to take some work,” Carl said before he got out of the car.

“Where are you going?” Rowan called out after him.

“I’ll find my way. You do the same and let the dog and your little supernatural friends watch your back.”

He did a little jig and like a heat shimmer, faded from sight.

Clive wasn’t going to go easily into the box marked dog owner. She bet in the old days he had those English wolfhounds other people took care of.

Star jumped into the front seat and made herself at home.

“Okay then, magic dog. Let’s go home. I’m going to have to do really dirty things with your new daddy to ease your transition into the family,” Rowan muttered as she pulled back out to the road. 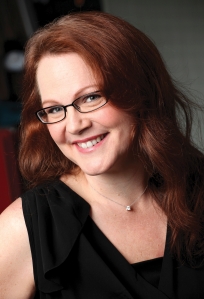 The story goes like this: While on pregnancy bed rest, Lauren Dane had plenty of down time so her husband took her comments about “giving that writing thing a serious go” to heart and brought home a secondhand laptop. She wrote her first book on it before it gave up the ghost. Even better, she sold that book and never looked back.

Today Lauren is a New York Times and USA Today bestselling author of over sixty novels and novellas across several genres.

Win a copy of Blood and Blade, the latest novel in the Goddess with a Blade series!
a Rafflecopter giveaway (US Only)

Goddess with a Blade

My first love has always been BOOKS. My blog features my reviews, author interviews, excerpts, and other bookish activities. I read practically all genre, according to my mood.

AUDIBLE GIFT MEMBERSHIPS – GET IT HERE